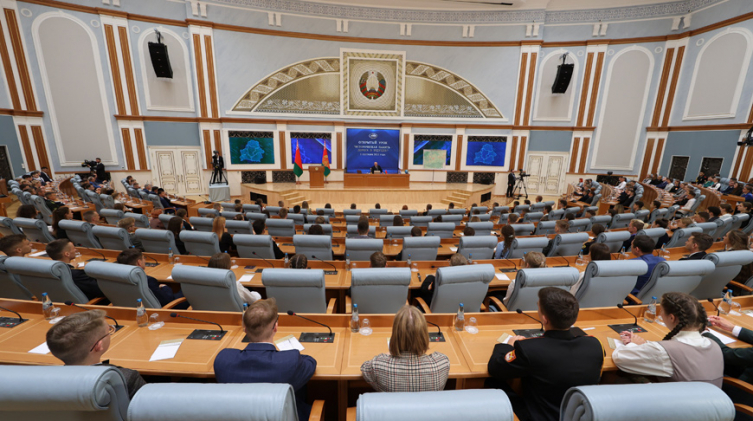 Belarusian President Aleksandr Lukashenko met with university students and students of secondary and specialized secondary education on 1 September, Knowledge Day. The head of state decided to hold an open lesson themed "Historical Memory - the Road to the Future" in the Palace of Independence, BelTA has learned.

Several hundred young people have been invited to attend the event. Among them are scholarship holders of the special presidential fund for social support of gifted pupils and students, holders of the presidential scholarships, participants in the national competitions of scientific works, winners and laureates of creative international and national competitions, representatives of volunteer movement, members of student teams and others.

In addition, five leading regional universities are on a video link with the Palace of Independence, and the lesson is broadcast live at all educational institutions.

The national anthem kicked off the lesson.

“Let me quote one phrase: “The growth of Lukashenko's personality cult, including the obligation of young people to listen to his instruction at the start of the school year, is an element of totalitarianism. There will be no totalitarianism,” the head of state began his speech unexpectedly.

Aleksandr Lukashenko continued with the latest news. According to the head of state, the country has already harvested eight million tonnes of grain crops, while leading Belarusian companies, despite the sanctions, keep developing and mastering modern technology. The president also stressed that the army is on high alert with the situation remaining tense at the borders.

“I asked for this thing to be brought to our meeting: it is the first computer our smart people gave me. Frankly speaking, less than 20% - about 12% - of it is Belarusian. By the end of the year, this figure will reach 30%. This shows we have a huge potential,” said the president.

“You wonder why the president has listed all of this. Dear friends, this is how our people, you and I, write our history. Our history is not only our heroic past,” the head of state explained.

The president also showed various Soviet-period high awards of famous Belarusian writer Vasil Bykov. It turned out that those awards were simply on sale at a market. “He was a controversial person. But these cannot be sold just like that. Everything is just crossed over like that. We have no right to forget our people, though controversial, but being part of history,” Aleksandr Lukashenko said.

About the open lesson

First of all Aleksandr Lukashenko extended greetings to students and teachers on the start of the new academic year. “For many of you it is the year when you say goodbye to school, while some of you are taking the first step towards your chosen profession or are about to enter the workforce. Either way, this is a critical and life-changing period in your lives, a very important period,” the president said.

“This day is special both for you and me. You know that I always find time to meet with teachers and students students on Knowledge Day. But for the first time today I did not go anywhere. Not long ago, at a meeting with the pioneers here, you voiced, in my view, a very interesting proposal to hold the first open lesson of the new academic year. I accepted that offer. In my time I have held many lessons,” the head of state added.

Some 19 years ago Aleksandr Lukashenko held an event of a similar format at the Belarusian State University. Many of the topics raised by that generation are still relevant today, he said. “Just like then, the world is seized with events today that require a timely clarification of the state's position. The position based on the centuries-old experience of different generations of Belarusians, on their historical choice, on the deeds of our ancestors, examples of the true love for their land,” the president said.

The President underlined that the lesson would be held according to all the rules and he intended to ask questions to the participants of the event.

The president stressed that the lesson would be conducted according to all the rules and that he intended to ask questions to the participants of the event during it.

The first question Aleksandr Lukashenko addressed to the deputy dean of the History Department of the Belarusian State University. The head of state asked him why Belarusians should keep the historical memory. “History is the mentor of life. In order for us to educate the future generation, patriots of their homeland, they need to know about every page of the history of our country. Without historical memory it is impossible to bring up true patriots,” Aleksandr Burachonok replied.

The head of state could not help but ask Zoya Vinogradova, a history teacher of Minsk International Gymnasium and a member of the group working on history textbooks, whether the textbooks focus on the historical memory of the Belarusians. The teacher's answer was affirmative.

Aleksandr Lukashenko also asked Deputy Director of the Institute of History of the National Academy of Sciences Stanislav Yuretsky: “What is our history for you personally as a scientist and a man of advancement?”

“What are you proud of in our history?” the head of state asked young scientists and school students.

Brest State University graduate student Sergei Zhuk said he was proud of the first symbol of independence - St. Sophia Cathedral in Polotsk - and the history of his family. Student of the Machulishchi secondary school, participant and winner of research conferences and social science Olympiads Viktoria Shaikina spoke about touching meetings with veterans of the Great Patriotic War. “First of all I am proud of our people, all the people who went through it,” the student answered.

Who are we and where are we from?

The president addressed MP Igor Marzalyuk with a question.

“So who are we and where are we from?” Aleksandr Lukashenko asked.

“We are from historical Rus, from the united East Slavic pool. We are the heart of Slavic Europe. The ancient Slavic language, the original Slavic matrix is from Belarus. Together we created the most ancient state formation,” replied the historian.

After an allegorical prelude, the priest said, “We talk a lot about spirituality and patriotism today. But I do not get a clear answer. These are only two words - spirituality and patriotism. What do they mean? True patriotism is linked to the spiritual life of man and historical truth. One cannot hide some facts and flaunt others. Every time has its achievements and mistakes. Nationalism begins without spirit, and nationalism is praised without truth.”

“Spirituality is living in the spirit. The spirit is alive when it overcomes the flesh - profit, habits, irrepressible desires. It is by the spirit that man chooses honor, not money. The homeland, not comfort. For the spirit it is more important to be than to have,” said Fyodor Povny.