Lukashenko about Horizont: I don't regret keeping the enterprise running 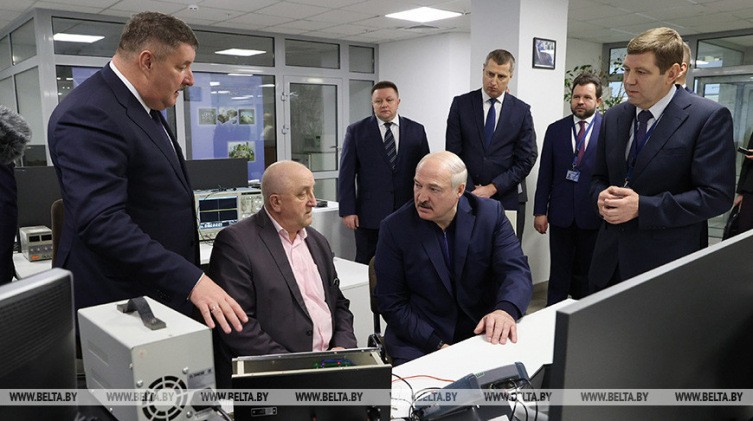 The decision to preserve and develop the enterprise was justified. Belarus President Aleksandr Lukashenko made the statement as he talked to a number of workers of the holding company Horizont on 5 January, BelTA has learned.

Aleksandr Lukashenko recalled his visit to Horizont at the start of his presidential career when they had to decide on the fate of the enterprise that was in a difficult situation after the collapse of the Soviet Union. “I recall this period when we had to make complicated and difficult decisions and the fact that we didn't sell, didn't give away [the enterprise] in exchange for vouchers and the rest to frauds,” he noted. “If you want to sell yourselves away at some point in time (without me certainly), go ahead. But I don't intend to sell Horizont. Contrariwise, I believe it is necessary to grow and expand production. Because in difficult times private owners tend to cut loose low-profit assets. People get fired then. When the state backs you up, then some development is ensured,” Aleksandr Lukashenko said.

“It is a great enterprise, part of our country's image. Horizont, Vityas in Soviet times… Horizont was quite a lofty company. It is good that it has been preserved,” the head of state stressed. “I don't regret keeping the enterprise running.”

The president also spoke in positive terms about the establishment of an innovative center at Horizont where IT specialists and developers work among other people. They create proprietary products, making Horizont a modern product company. Aleksandr Lukashenko pointed out that other centers of competence have emerged recently in the IT sphere in addition to the Hi-Tech Park. It enables good conditions for healthy competition. In his words, an entire stratum of young and promising IT specialists has appeared in the National Academy of Sciences of Belarus and in manufacturing sector enterprises. “The country needed an alternative and you are a good alternative,” Aleksandr Lukashenko noted.

Speaking about Horizont's financial and economic performance, the head of state noted the holding company has its own target markets and good performance indicators even in the complicated situation arising from the coronavirus pandemic. Aleksandr Lukashenko pointed out once again that the decision to keep manufacturing even in a complicated epidemic situation had been the right one. Some Belarusian companies have exploited the opportunity and increased shipments to foreign markets where factories and plants had to suspend operation. For instance, the Atlant company, which the president has also visited, has considerably increased shipments of refrigerators to Russia. The situation is similar at Horizont.

Aleksandr Lukashenko noted: “A crisis is always a time of opportunities. It doesn't bring only problems and hardships. You've exploited these opportunities. Today you work day and night, there is a demand, there is no backlog of finished products. You've accomplished a great thing. We are past this period in this regard and we've gained an advantage.” Unlike other countries across the globe Belarus finished the year 2020 with a minimal decrease in the GDP thanks to timely decisions made by the country's leadership. The 2020 GDP remained virtually on par with 2019's. According to the president, Belarus' gross domestic product of 2020 is expected to drop to 99.5% as against 2019, only half a percentage point down.