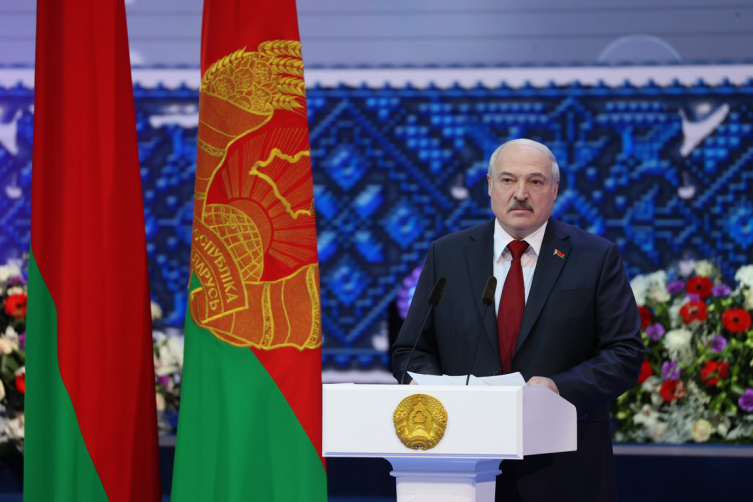 The head of state called this gala evening amazing. “We have already entered the business rhythm of the coming New Year, but we are still in the atmosphere of bright and good New Year and Christmas holidays. In the atmosphere that many years ago inspired us to create a unique award "For Spiritual Revival", ”he explained.

Alexander Lukashenko stressed that the award ceremony is one of the main events of the year. It has firmly entered the life of Belarusians as a modern tradition that connects the past and the present of their native land, fills the goals and aspirations of citizens with a special meaning, the head of state noted.

At the end of 2020, the prize was awarded to labor and authors' collectives, representatives of religious and educational organizations for their active work in the humanitarian sphere, which contributes to the preservation and augmentation of the national cultural heritage, fostering love for the Fatherland among young people, strengthening spiritual values ​​and ideas of mercy.

Among the awardees were representatives of Minsk region.

Thus, the prize "For Spiritual Revival" for a significant contribution to the upbringing of orphans and children left without parental care was awarded to the parents-educators of the family-type children's home of the education administration of Soligorsk regional executive committee Tatyana and Andrei Baritol.

And the priest of the Holy Trinity Church of the agro-town Soltanovshchina of the Nesvizh region, Archpriest Oleg Abramovich, was awarded this award for his great personal contribution to the strengthening of spiritual values ​​among children and youth, the organization of charitable activities of the brotherhood in honor of the Transfiguration of the Lord.

Tatiana and Andrey Baritol have already raised 12 children, now they are raising nine children aged 2 to 16. Talking to reporters before the ceremony, mother of many children Tatiana Baritol shared with them the secrets of family well-being. “In a family it is important to listen and hear, respect each other. This is where the family begins,” she said.

The laureates of the prize "For Spiritual Revival" also became the group of authors consisting of a member of the Belarusian Union of Artists Elena Andryushchenko, deputy head of the main department of state special cultural events and professional art - head of the professional arts department of the Ministry of Culture, chairman of the Synodal Department for Church Art, Architecture and Restoration of the Belarusian the Orthodox Church of Maria Netsvetaeva and the director of the ALC "Golden Plane" Oleg Ermolovich.

They were awarded for the restoration of the Turov Cross of the XII-XIII centuries. The same award for the creation of a memorial complex on the site of the burned-down village of Ola in the Svetlogorsk district of the Gomel region was awarded to the team of authors consisting of the chief architects of the Institute Gomelgrazhdanproekt project Sergey Pervitsky and Viktor Beltyukov, as well as a member of the Writers' Union of Belarus Izyaslav Kotlyarov.

For strengthening the ideas of humanism in modern Belarusian society, selfless work in providing medical care to the population during the COVID-19 epidemic, the staff of the City Children's Infectious Disease Clinical Hospital of Minsk was awarded the prize “For Spiritual Revival”.

Alexander Lukashenko called today's laureates the pride of the nation. According to him, these are the people who write history. “Such good deeds and undertakings as yours remain in the memory of the people, give future generations a moral and spiritual guideline, and lead to new high goals. And the chronicle of the life of Belarusians continues, ”the President noted.

“Today, when the world is becoming more and more aggressive, it is especially important to stand firm on our land, remember that the Belarusian people have lived here for centuries and will live, feel one with the generations of different eras, and understand that we have our own path. It was started by great people, we continue it, - said the head of state.

And knowing what trials our ancestors went through, how heroically they defended their land in wars, how, without statehood, they preserved cultural traditions and spiritual values, we see the main thing."