A kindergarten with a STEAM center appeared in Nesvizh 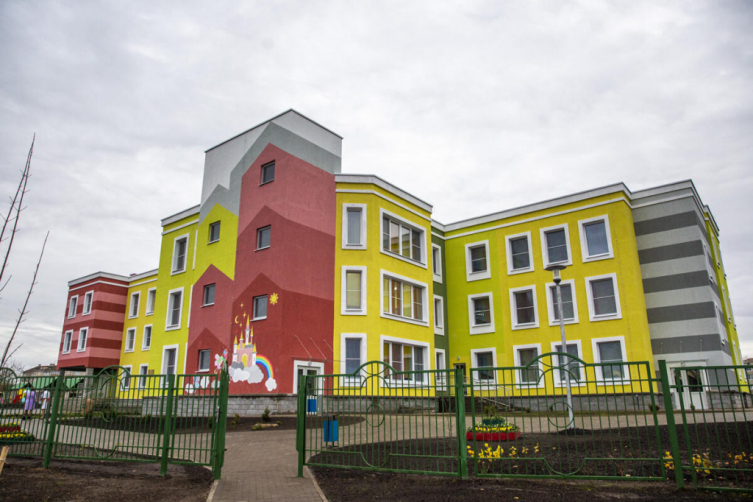 On Friday, November 20, there was one more state educational institution in Minsk region. The head of the Minsk Oblast Executive Committee Alexander Turchin took part in the opening ceremony.

"Magic Land" - this is the name given to the new kindergarten, which was solemnly opened in Nesvizh. The capacity of the preschool is 230 people.

Kindergarten No. 7 is a modern 3-storey building in which 12 groups will work. Two of them are intended for children from 2 to 3 years old, four - for toddlers from 3 to 4 years old, three groups - from 4 to 5 years old and the same number - for preschoolers, from 5 to 6 years old.

The kindergartens that already exist in the city are overloaded, so the opening of a new one is a real holiday. In addition, housing is being actively built in the district, so it will become much easier for families with children.

The red ribbon at the entrance was cut by the head of the region Alexander Turchin, the chairman of the Nesvizh regional executive committee Alexander Lomsky, the head of the kindergarten Nadezhda Brodskaya, as well as the developer's representative - the general director of Prodom Andrey Dyakov.

A nice gift for a new institution is a certificate for the purchase of gaming equipment.

Alexander Turchin visited the catering unit, swimming pool, middle-aged group and made sure that the institution created excellent conditions for the comprehensive development and education of children.

By the way, on the third floor of the kindergarten there is an interactive wall on which 31 educational programs are installed.

The kindergarten has a gym, gym and music room, sensory and ethnographic rooms.

Also, together with the Ministry of Emergencies, a mini-center was created here, in which they will work with children from families that are in the SOP. For these guys, the problem of safe handling of household appliances, electricity and medicines is especially urgent.

The intellectual development of young residents of Nesvizh will be facilitated by the STEAM center with a 3D printer created at the institution.

STEAM education meets modern needs: it makes teaching creative, focused on research activity, creates favorable conditions for the development of interest in natural and technical disciplines. The guys are starting to put scientific methods into practice. They learn active communication and teamwork. They develop an interest in project activities, children learn to think analytically, and they develop engineering thinking and imagination.

Since there will be two sanatorium groups in the kindergarten, a modern medical unit with an inhaler and a physiotherapy room has been equipped here. In it, children can undergo treatment at an early stage of the disease without going to the clinic.

- Today is World Children's Day. It was declared by the UN in 1954. Therefore, it is symbolic that it was on this day that a new kindergarten was opened. I have visited many discoveries and I can say that each garden is special, - said Alexander Turchin. - The first thing I liked was that there is a pedagogical college in Nesvizh, which trains personnel, including for such institutions. Second, this is an office where they will learn the basics of security. Still, it is worth teaching children from an early age to problematic situations that may arise in life.

The head of the Minsk region praised the builders who built the kindergarten in just 10 months.

“In December this year, we plan to put into operation four more such institutions in the Minsk region,” noted Alexander Turchin. - For 2021, we also plan to build kindergartens and schools. This week I was in Smolevichi and Stolbtsy, where two secondary education institutions are being built. They will be put into operation on September 1 next year.

- Since our kindergarten is called "Magic Land", we also have special groups, these are original cities - Sunny, Magic, Emerald. Our shady canopies are also magical worlds of music, sports, nature, safety, fairy tales, - said the head of the kindergarten Nadezhda Brodskaya. - In our institution, the only one in the Nesvizh district, there is a pool where children can heal. We plan to develop extrabudgetary activities. Parents with pupils from other kindergartens will come and also practice in our pool. We have a room of the Ministry of Emergency Situations, which was created in conjunction with the regional department for emergency situations, where children will learn the skills of safe behavior in everyday life in various situations - on the water, indoors, on the road. We have an interactive wall - a gift from the Nesvizh regional executive committee, as well as an interactive sandbox and a globe.

On the territory adjacent to the kindergarten, themed playgrounds were equipped for children, the design of which was invented and developed by students of the Yakub Kolas Nesvizh State College. There is also a sports ground for teaching children the rules of the road.

To keep the kids safe, a video surveillance system is installed in the halls of the kindergarten and in the food block, an internal telephone connection and an intercom system are provided. In addition, the premises are fully equipped with primary fire extinguishing equipment.

The new institution was built at the expense of the republican and regional budgets. General contracting organization - "Prodom". The general director of the enterprise Andrey Dyakov presented the kindergarten with a certificate for the purchase of an electronic flipchart.

Children will start kindergarten in a few weeks.