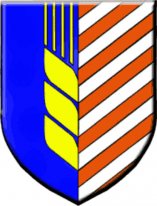 The coat of arms of Soligorsk is a symbol of a modern mining city. It consists of a Varangian shield, square at the top and narrowing towards the bottom. The shield is vertically divided into two parts. The dexter half (to the viewer’s left) is blue, features a half of a wheat stalk. The sinister half has twelve red and silver (white) alternate diagonal stripes.

These stripes symbolize the layers of potash salts, the main natural wealth of Soligorsk District. The layers go in the same order and are painted in the same colors as found in the Earth’s crust. The golden wheat stalk in the blue field symbolizes fertility, life-giving force that potassium fertilizers give to soil. The wheat stalk also symbolizes the economic strength, prosperity and national unity of the town.

The flag was approved by Decree No. 564 of Belarus President Alexander Lukashenko as of 1 December 2011 "Concerning the establishment of the official heraldic symbols of the administrative-territorial units of Minsk Oblast.”